Gibson wrote: ↑
Sun Jan 10, 2021 11:02 pm
RE Faraday cages - my keys weren't in a pouch/cage but I've got one ordered. Excellent tip!
Likewise with the steering-wheel lock, I've got one arriving tomorrow as an additional visual deterrent. The car isn't a daily so the hassle of removing it every time will just be a minor inconvenience and will probably annoy the GF more as it'll reduce luggage capacity even more.

I have to say I'm relatively surprised they targeted the F considering the criminal fraternity's usual love of 4-door fast Germans - there are 2* M3, 3*M4, 1* Golf R and 2* RS4/6s in the immediate neighbourhood that I'd have considered of far more of interest to this lot. Along with a seemingly infinite number of 911 variants that I'd have guessed would be more interesting for breaking purposes.
Now I think on it though the majority of the above cars have had wheel locks on them from what I recall during COVID walks. I fear others may have painfully learnt the lesson I've learnt this weekend...

Gibson wrote: ↑
Sun Jan 10, 2021 11:17 pm
@RPSN, no arrests as far as I'm aware but it sounds like the Police did follow the suspects. I tried calling the Met today but since it's non-urgent I need to call during working hours - I'll keep everyone posted. I'm mostly intrigued as to the speed of attendance, one neighbour is convinced that Jag's assistance/SOS kicked in but I'm 99.99% sure that is not the case and it was sheer luck they were nearby (we are roughly on the route between a couple of estates and our local Police Station).

No CCTV so far, I need to canvas other neighbours in case they have RING type doorbells that may have caught some activity. I strongly suspect it'll be a case of hoods/masks though. Closest lead is the 17 Plate Audi though so perhaps I can surface the full reg. That car was likely also stolen though.

RE the young lads yesterday - yeah I did find it odd that they didn't say anything or even acknowledge with a nod etc as I'm sure we've all usually encountered. I'll put it to the Police when I speak with them this week for their thoughts.


I can imagine how you felt when you first seen the damage done to your car but as you say, nobody was hurt and the door glass will be replaced.

The Faraday pouches and steering wheel lock will add extra layers of security to the vehicle......remember to shield your spare keys too!

It shouldn’t take you long to get into the habit of using the steering wheel lock. I do it without really thinking (on ‘automatic pilot’ so to speak) and it’s worth it for the extra peace of mind. As for the luggage capacity being reduced, that shouldn’t affect things too much with the coupe!

The owners of those performance cars in your immediate neighbourhood seem to be aware of the security benefits of a visual deterrent in their vehicles as the majority of them have steering wheel locks etc fitted.

It’s a shame that the Police didn’t catch up with the criminals who damaged your car and arrested them. Looks like they’ll probably get away with what they did but it’s worth pursuing the issue further, especially if you can get hold of some security footage etc.

I may be wrong but I don’t think the Jaguar Assistance/SOS that you mention would have alerted the Police of the attempted theft? It's more likely to be sheer luck that the Police were close by when the incident occurred.

As far as I’m aware, the Jaguar theft alert to the Police is included in the Jaguar InControl Remote and Secure package which has an annual subscription fee of £260. It’s called ‘Secure Tracker’ and this is what it says on the Jaguar website........”In the event of your vehicle being moved illegally, the Land Rover Tracking Centre will immediately alert you and will liaise with the police to pinpoint the exact location of your vehicle. If you believe your vehicle has been stolen, call the Land Rover Tracking Centre directly from your Remote smartphone app or the telephone number which can be found on the InControl owner’s section of www.landrover.co.uk”

As your car door is now windowless on the driver's side (with taped bags to suffice) and is parked on the street, it could be a good idea to move it to a more secure location e.g. a locked garage etc until the glass company arrives?......Hopefully this won't be too long.

Those young lads in a new grey Peugeot you seen the day before, who were eyeing up your car and taking close up photos before they promptly moved off when you returned, could very well have been something to do with what has happened? It's worth mentioning it to the Police even if nothing comes of it.
2016 Jaguar F-Type S RWD Coupe 3.0 V6 380PS Supercharged
Rhodium Silver
Panoramic Glass Roof
Sports Seats (heated) in Jet Leather
Seat Memory Pack 2 (14x14 way)
Powered Tailgate (open & close)
Reverse Park Camera with Guidance
Front Parking Aid
Top

re. wheel locks, I've got the Stoplock Pro. I used to have one of the full wheel face covers but found them quite cumbersome. The one I have now takes a couple of seconds to remove and stick in the passenger footwell before setting off. Yes, the full-face ones do provide additional security, but it's all about visual deterrent with the knowledge that this lock isn't going to come off in a few seconds.
MY21 F-Type P450 R Dynamic in Portofino Blue, Black Exterior Pack, Performance Seats, Suede headlining (with Blur as support act)
Top

Agree with all of that.

I’m using this steering wheel lock from Halfords, it’s a really solid heavy design with a chunky square key plus two spares. Very easy to put on / take off and fits nicely into the passenger footwell without restricting my other half’s legroom. 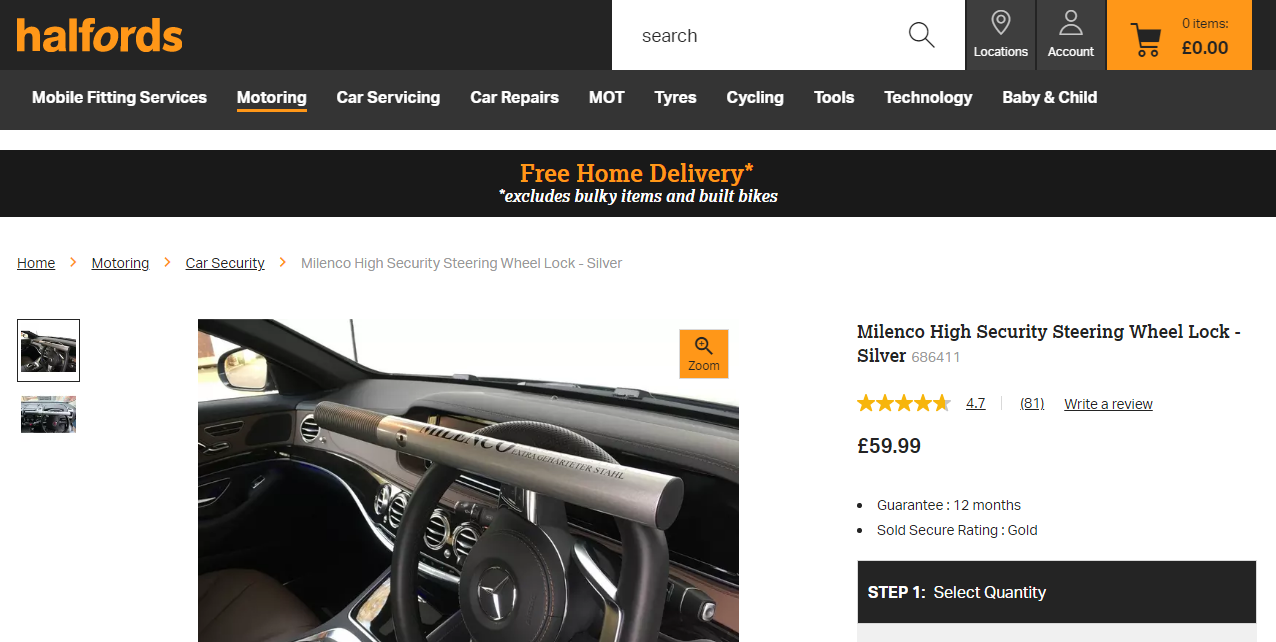 My experience, which admittedly (fortunately!) doesn't include broken glass, is that InControl will attempt to contact the owner if they receive indications of untoward behaviour to the car. My contacts were when I'd omitted to set service mode and the workshop somehow triggered the "vehicle stolen" condition, and when my car reported that its battery was flat (not a theft attempt) and in both cases I received a call to inform me of the situation.
MY18 F-Type V8 R AWD in Glacier White
Lots of leather and toys, and loads of noise!
Top

Cluck wrote: ↑
Mon Jan 11, 2021 9:38 am
re. wheel locks, I've got the Stoplock Pro. I used to have one of the full wheel face covers but found them quite cumbersome. The one I have now takes a couple of seconds to remove and stick in the passenger footwell before setting off. Yes, the full-face ones do provide additional security, but it's all about visual deterrent with the knowledge that this lock isn't going to come off in a few seconds.

That's great to hear Cluck as the Stoplock pro is the one I've opted for!

@RPSN - I've minimal options for more secure storage, unfortunately. The only offer I've got is from a friend with a secured underground spot ~3 miles away but from my understanding of the garage is that it's tricky for anything aside from hatchback/city cars to access. I'm just keeping it within eye/ear-shot for the timebeing since I'm WFH anyway
Speaking to glass co it should all be fixed up today/tomorrow.

Police said they're closing the report unless there's additional CCTV and that they can't make a note of the suspicious Peugeot since there's no direct link to the crime itself.
Top

@Gibson - If your friend’s secure underground spot is tricky for anything aside from hatchback/city cars to access, you’d really struggle with the F-Type due to its width.

Hope they replace the window glass for you today as the car is more vulnerable overnight in that condition.

I didn’t think you’d get any further with the Police.......it’s a shame that the clowns who damaged your car have got away scot-free!

Don't demean idiots and clowns, the people who damaged the car were low-life scumbags. Give 'em their rightful name.
MY18 F-Type V8 R AWD in Glacier White
Lots of leather and toys, and loads of noise!
Top

Careful with the courtesy raising of the steering wheel when using a steering lock. I switch it off in case I forget.
F-Type R Coupe Firenze (Italian Racing Red) AWD
Top


You’re absolutely right.......those people are the scum of the earth and I hope they get their comeuppance soon!

From now on I'll be double locking and I'd only single lock if (for example) the car was on a ferry or being transported as the movement/tilt etc could trigger the alarm if double locked.

My car doesn't have keyless entry (which I don't mind at all).

Here’s details for the Single and Double locking methods and alarm systems:

The PERIMETER ALARM system is activated when the vehicle is Single locked.

Once activated, the alarm system will sound if:

The bonnet, tailgate or Luggage compartment, or any door is opened.

The engine START/STOP button is pressed without a valid Smart key present.

Press the lock button twice within 3 seconds. Double locking secures the vehicle and prevents the doors and the Luggage compartment from being unlocked or opened from inside or outside of the vehicle, except with the correct Smart Key. The hazard warning lamps will flash twice (with a long second flash) and an audible warning will sound as confirmation.

When the vehicle is Double locked, the doors cannot be opened, either from inside or outside of the vehicle.

The FULL ALARM system is activated when the vehicle is Double locked.

Once activated, the alarm system will sound if:

The bonnet, Luggage compartment or tailgate, or any door is opened.

Movement is detected within the vehicle's interior.

The vehicle is raised or tilted.

The engine START/STOP button is pressed without a valid Smart key present.

If the vehicle is fitted with a Battery backed-sounder, the sounder will sound if:

The vehicle's battery is disconnected.